I Read My Teen’s Text Messages…

My fourteen-year-old daughter and I are close. I’ve always been forthcoming and candid (within reason) about my own life experiences and views. Because of this, our conversations tend to be quite open.

Lately, though, she’s been less inclined to share her stuff with me. It’s to be expected and I’m okay with it, actually. She’s doing that push for independence thing that happens around this age. She’s also been moodier and more pessimistic which I expect is due to the surge in hormones, the increase in school work, a growing interest in boys, and the seemingly inevitable friendship drama.

I’m not shocked about any of the recent changes in my girl nor do I feel concerned about our current relationship dynamic. But, I have to admit, these shifts have changed the way I do things as a mom. If you had asked me a few years ago if I would snoop through my kids’ text messages, I would have said: “No. How disrespectful of their privacy.”  But now, I disagree with my former stance.

These days, and for the unforeseeable future, I most certainly do look through my teen’s phone. I read her text messages and her private DMs. I keep an eye on what she and her friends are posting on their social media outlets. I look at her camera roll and her ‘Notes’ every once in a while. And, I do all of this without guilt. Because that little phone is connected to the great big world out there, a world that includes predators, bullies, negative influences, and a whole wealth of knowledge that she may or may not (most likely the latter) benefit from. There, in the palm of her hand, is a very powerful source of information. From porn to skewed celebrity gossip to actual videos of people committing suicide, there is just SO much potentially tough to process information just a click away. It’s my job to keep a watchful eye on my child’s well-being and to help her make sense of what she sees and reads. 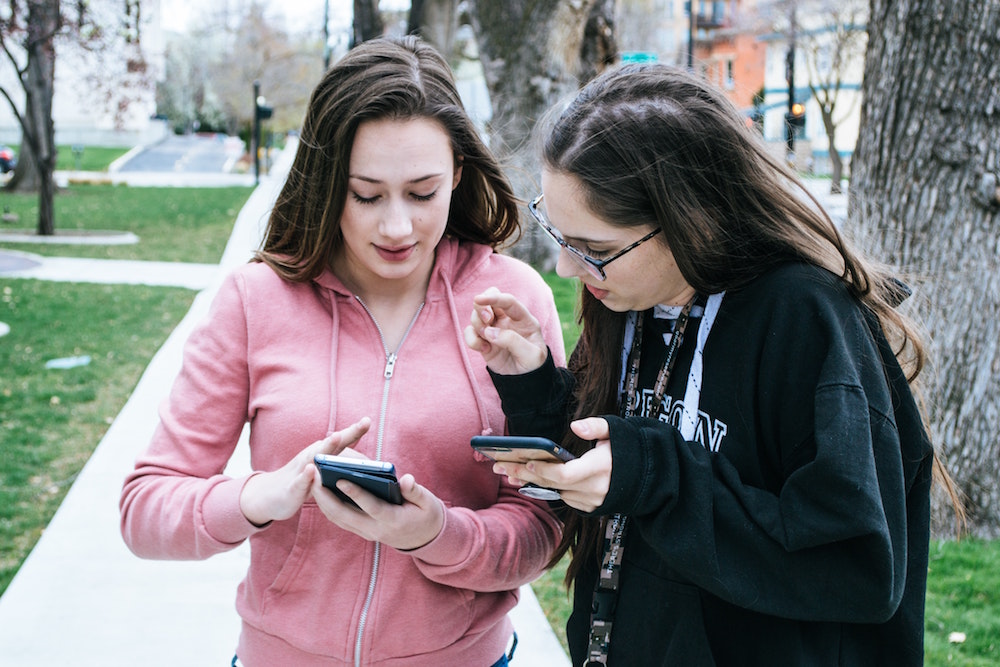 I have the password for her phone. She knows I do because she gave it to me. When we bought the phone for her birthday last year it was part of the deal.  I was honest with her at the time. I told her I might browse through it every once in a while and if she had things she wants to keep private, like personal thoughts or stories, she should write them in a journal. I think we can all benefit from a private place to express ourselves and I promised her I wouldn’t read her journal. But, due to the nature of the internet, I don’t promise the same privacy and freedom with her phone.

Through my recent browses,  I’ve learned a few things about my daughter. Though nothing that surprises me, really. She has a mouth like a trucker sometimes (no offense to those who drive a truck). Most of her friends do, actually. I have read and seen things that worry me but only slightly like her plans to try vaping, for example. But, so far, I haven’t stood in the way of her making poor choices. She is bound to experiment and do things that she knows she shouldn’t do. Taking some risks is all part of the growing process and she has the right to make her own mistakes without me helicoptering in and foiling her process. So when I read the messages about vaping, that were covertly written but easily deciphered, I let her follow through with her plans to vape. Turns out she didn’t really like vaping, thought it was a bit “meh.”

It also appears my mom-lectures have been getting through to her after all. Because, not only did she try it and decide for herself it was “meh” but she then went on to encourage her friend to stop vaping by warning her about the adverse effects of chemicals in her body.

These teen years are only just beginning for us. There will be more lessons to learn and mistakes to be made, both hers and mine. Maybe reading her text messages, and snooping through her phone will end up feeling like mistakes someday. But, right now it feels like the right thing to do, as her mom, so I’m going to keep on doing it.